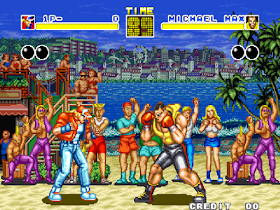 The player competes with the opponent in two out of three matches. A distinctive feature is a two-way battle and the presence of two lines: a background line and a foreground line. Players can switch between lines at any time, except for the single player mode, where they have to wait until the AI ​​opponent changes lines.
When the second player joins the first player in the middle of the battle, they fight together against the AI opponent two on one.
After every second match in the single player tournament, the player will participate in the bonus mini-game arm wrestling against artificial intelligence. The player must quickly press button A to win this game.

The plot of Fatal Fury is centered around a martial arts tournament known as the "King of Fighters" tournament, which takes place in the fictional US city of South Town and is sponsored by local crime boss Geese Howard. Ten years before the events in the game, Geese killed martial artist Jeff Bogard, who stood in his way. Now Jeff's sons - Terry and Andy - together with their friend Joe Higashi enter the tournament to take revenge on Geese.

At the beginning of the game, the player is asked to choose between Terry, Andy and Joe. The player is then asked to choose one of the four fighters as their first opponent, which are Duck King, Richard Meyer, Michael Max and Tung Fu Rue. After defeating his first opponent, the player encounters three other opponents in a certain order. The order of opponents: Richard, Michael, Duck, Tung, with a cycle starting with which opponent the player chose. The last three opponents before Gis Howard fight in the following order: Hwa Zai, Raiden and Billy Kane.