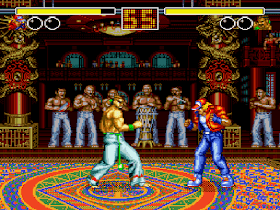 Genre: Action
Perspective: Side view
Visual: 2D scrolling
Gameplay: Fighting
Published by: TAKARA U.S.A. CORP.
Developed by: SNK Corporation
Released: 1993
Platforms: SEGA Genesis / Mega Drive, Neo-Geo, Super Nintendo (SNES)
As for the graphics and sound, there are no particular complaints. But the choice of heroes is poor - only three for a single game (8 in the "versus" mode). They are opposed by a variety of fighters, from fairly simple to very cool. There are only three difficulty levels, the duration of the battle can also be selected. In general, the game is slightly above average and is designed for fans of fights. Game for 1-2 players.
‹
›
Home
View web version