The Adventures of Kid Kleets (SNES) 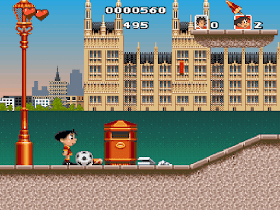 Genre: Action
Perspective: Side view
Visual: 2D scrolling
Pacing: Real-time
Gameplay: Platform
Interface: Direct control
Published by: Ocean Software Ltd.
Developed by: Ocean Software Ltd.
Released: 1994
Platforms: Super Nintendo (SNES), 3DO Interactive Multiplayer, Atari Jaguar
The plot plot pleases - this is not another kidnapping of the princess, and not the invasion of the space armada. Although, without aliens, it could not have done. Today in London the final of the World Cup on football should be held, because it is 1994 in the yard. From early morning Soccer Kid is waiting for the event at the TV screen. And at the stadium, a crowd of excited fans rages impatiently before the appearance of the teams, the atmosphere is tense to the limit, and of course, all this is broadcast live.
Who would have thought that at this time in boundless space, millions of kilometers from the earth, the pirate Scab, greedy for trophies, is also watching the broadcast. He, the rogue, is not even embarrassed by the fact that, theoretically, the signal from the Earth should come with a big delay. So he flies into the stadium with impunity and steals the cup in front of thousands of fans. But on the way back, Scab got so carried away that it crashed into an artificial satellite of the earth, as its ship broke into pieces from the impact, and five fragments of the trophy fell to the ground, in the form of a meteor shower, at the geographic latitude of Britain-Japan.
Soccer Kid saw all these misadventures on TV. That's how far technology has come! And of course, he knows what to do - you need to collect the cup as quickly as possible in order to return him to the final of the match. The boy who masterfully wields the ball did not suspect that there were 28 levels ahead of him with increasing difficulty: England, Italy, Russia, Japan and finally, the USA! Since this is a platformer, there are a lot of obstacles on the way: from open hatches, animals and people, to moving platforms and spikes that pierce the ball. There are secret and super secret places on the levels, as well as scattered football cards, they will be needed to get to the bonus levels.
In the non-CD games, the story is that a pirate crashes into an asteroid - it looks more believable.
Soccer Kid began his triumphant march with Amiga and Amiga CD32 in 1993, and then was ported to PC (DOS), SNES, 3DO, and belatedly to Sega Saturn. Already in our time, there have been releases for Atari Jaguar, Windows Mobile, GBA and PlayStation (obviously, releases of unreleased games).
SNES: overall a rather poor release, the game is noticeably sped up, which makes it not so great to play.
‹
›
Home
View web version