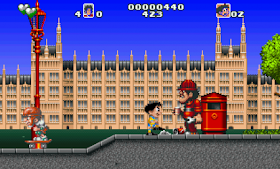 Genre: Action
Perspective: 3rd-person, Side view
Gameplay: Platform
Published by: Songbird Productions
Developed by: Krisalis Software Ltd.
Released: 2000
Platforms: Atari Jaguar, 3DO Interactive Multiplayer, Super Nintendo (SNES)
The game Soccer Kid was supposed to be published by Ocean Software and should be released in 1995. But due to the rapid departure of the Atari Jaguar from the market this never happened. Only thanks to the efforts of the Songbird Productions office, headed by the fan of Atari-Carl Forhan, the game was bought back in 1998 and was released in the form of a full-fledged cartridge only in 1999-2000, because there was still something to settle. The game Soccer Kid came out on many gaming systems. The plot in the game remained unchanged. One small fan of football is looking forward to the World Cup. But the aliens Scab pirates decided to kidnap the World Cup. And when they carried it with a special beam to their ship, it crashed into a meteorite and crumbled into several parts, to the following countries of the world: England, Italy, Russia, Japan, the USA. Game on the gameplay is similar to Marko's Magic Football.
‹
›
Home
View web version