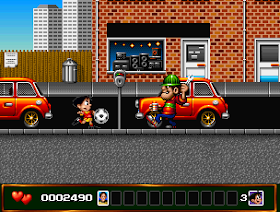 Genre: Action
Perspective: 3rd-person, Side view
Gameplay: Platform
Published by: Studio 3DO
Developed by: Krisalis Software Ltd.
Released: 1994
Platforms: 3DO Interactive Multiplayer, Atari Jaguar, Super Nintendo (SNES)
The plot plot pleases - this is not another abduction of the princess, and not the invasion of the space armada. Although, there were some newcomers here. Today the final of the World Cup is to be held in London, after all, 1994 is in the yard. From the early morning Soccer Kid awaits the event on the TV screen. And at the stadium a crowd of excited fans in an impatience rages before the appearance of teams, the atmosphere is heated to the limit, and of course, all this is broadcast live.
Who would have thought that at this time in an unlimited space, millions of kilometers from the earth, Scar pirate, eager for trophies, also watches the broadcast. He, the rogue, is not confused even by the fact that, theoretically, the signal from the Earth must go with a great delay. So, he flew with impunity to the stadium and steals the cup, in front of thousands of fans. But on the way back, Scab was so carried away that he crashed into an artificial satellite of the earth, apparently Russian, as his ship fell apart into pieces, and five fragments of the trophy fell to the ground, in the form of a meteor shower, on the geographical breadth of Britain-Japan.
Soccer Kid saw all these misadventures on TV. That's what the technique has already reached! And of course, he knows what to do - you need to collect the cup as quickly as possible to bring it back to the final of the match. Boy, masterfully owning the ball and did not suspect that ahead of 28 levels with increasing complexity: England, Italy, Russia, Japan and finally the US! Since it's a platformer, there are a lot of obstacles on the way: from open hatches, little animals and people, to moving platforms and thorns piercing the ball. On the levels there are secret and extra secret places, as well as scattered football cards, they will be needed to hit the bonus levels.
Versions on CD have introductory and final videos. There is also video animation and other events. Only the quality of the moviks is quite disgusting, it feels like they drew their dude, who already had a hand in the animation of the villains in Space Ace and Zelda for Cd-i.
In non-CD games, the pirate cuts into an asteroid - it looks more plausible.
His triumphal procession Soccer Kid began with the Amiga and Amiga CD32 in 1993, and then it was ported to PC (DOS), SNES, 3DO, and with a delay on Sega Saturn. Already in our time there were releases for Atari Jaguar, Windows Mobile, GBA and PlayStation (obviously, releases of not released games).
I was deeply offended by the way Russia was shown. Red crazy sailors, tanks, gymnasts, hired assassins and stuff-other. At the time of the creation of the game, 1993 was going on - already the USSR has not existed for a long time, and they still have a dancer in their cap dancing squatting on the Red Square! It's a shame, gentlemen. And on the other hand, it's not for nothing that the term "English humor" exists - they probably do not fully understand it either.
Specifically in the 3DO version of the game you can find a video showing the upcoming games for 3DO, in development. Many of them were canceled as a result, and SkyVyper came out as BladeForce. There was also an opportunity to stay between countries (not between levels!).