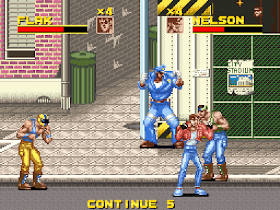 Genre: Action
Perspective: Side view
Visual: 2D scrolling
Gameplay: Arcade, Beat 'em up / brawler
Published by: Jaleco USA
Developed by: Jaleco Ltd.
Released: 1992
Platform: Super Nintendo (SNES)
The first game of the popular beat 'em up on SNES by Jaleco. Like all the first parts, they look very faded against the background of their subsequent sequels. The game, although it has a very well-established structure and content of Beat 'em up by this time, but there are a lot of such games, it somehow fails to stand out. Although the series has completely improved in the second, and even more so in the third parts. But getting to know them without knowing the first one is also not right. So get acquainted with the heroes of the game - Rick Norton and Douglas Bild, and then go to wet the enemies. Good game for 1-2 players.
‹
›
Home
View web version