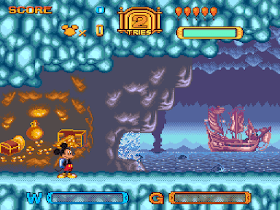 Genre: Action
Perspective: Side view
Visual: 2D scrolling
Gameplay: Platform
Interface: Direct control
Setting: Fantasy
Published by: Tomy Company
Developed by: Graphic Research Co.
Released: 1994
Platform: Super Nintendo (SNES)
The player controls Mickey and his backpack, from which he produces balloons that he can fill with water or gas and use as weapons to damage enemies. Depending on how a balloon is filled, it operates differently. Water filled balloons can be used to cross some obstacles, break things, or thrown at enemies. Helium filled balloons are used to fly or move underwater.
There are three difficulties to choose from (EASY, NORMAL, HARD), depending on which the amount of obstacles changes, and the total energy that Mickey has.
The same game mode takes over the one already used in the Japanese title Mickey Mouse III: Balloon Dream of 1992. Released only in Japan on the Famicom, it was re-released in the United States with a new set of characters and the title of Kid Klown in Night Mayor World.
The levels take the locations of six attractions of the Tokyo Disneyland park, namely Pirates of the Caribbean, Big Thunder Mountain Railroad, Splash Mountain, The Haunted Mansion, Space Mountain and Cinderella Castle Mystery Tour.
‹
›
Home
View web version