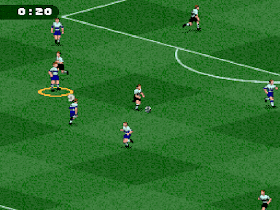 Genre: Sports
Perspective: Diagonal-down
Visual: 2D scrolling
Interface: Direct control, Multiple units / characters control
Sport: Football (European) / Soccer
Published by: Electronic Arts
Developed by: Extended Play Productions, XYZ Productions
Released: 1997
Platforms: Super Nintendo (SNES), PlayStation (PSX, PS1), SEGA Genesis / Mega Drive
A series of football simulators. These games may have improved in some places every year, may have remained unchanged, but always retained the same effect. You need to form your team and by all means win in any match, be it a simple rivalry or some kind of cup tournament, etc. Many are familiar with the rules of this game, and it is pointless to talk about the gameplay. We take on the role of a coach and at the same time a player and conquer all sorts of peaks of this virtual sport straight on the field. If you are a fan of such games, then by all means check out this series, and maybe in some part you will find for yourself what you need and will satisfy you in all respects. FIFA'98 Road to the World Cup - what is most surprising in this part is that just before the end of the era of 16 Bit, the guys from EA managed to present a real gem of this series, and indeed football simulators in general! The graphics have been redesigned and improved, the quality of sound effects has been improved, and the new interface design pleases. But that's not all, of course: a new Road to the World Cup'98 mode has been added. Now you first have to fight for access to the World Championship!
‹
›
Home
View web version