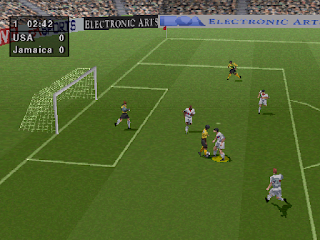 Genre: Sports
Perspective: Bird's-eye view
Visual: 2D scrolling
Interface: Direct control, Multiple units / characters control
Sport: Football (European) / Soccer
Published by: Electronic Arts
Developed by: Electronic Arts Canada
Released: 1997
Platforms: PlayStation (PSX, PS1), SEGA Genesis / Mega Drive, Super Nintendo (SNES)
For the fifth edition of the FIFA saga, EA Sports created a new graphics engine that improved the graphic quality, the fluidity of the movements, and defined details such as the faces of the players. New dribbles and fakes were also added, the offside rule was introduced, weather effects were polished and artificial intelligence was enhanced. Regarding FIFA 97, real football stadiums were licensed for the first time, with 16 fields from all over the world such as the Camp Nou or the Azteca Stadium.1
The game was published between June and September 1997, a few months after the 1998 Soccer World Cup in France. For this reason, EA Sports introduced a game mode with all the teams recognized in that year by FIFA, a total of 173, which allowed to play the qualifying phase and the World Cup with any national team. This is the only edition of the FIFA saga where such a mode has been included. Also included were 11 national leagues, though not international club competitions, and an indoor soccer mode.
In the sound section, an official soundtrack was used for the first time, the main theme in question was Song 2 by the British group Blur. In addition, the game was translated into eight languages, and the version for Spain had comments in Spanish for the first time (for the PC and Playstation versions). Manolo Lama and Paco González, who at that time were part of the Carrusel Deportivo program, lent their voices as commentators.
‹
›
Home
View web version