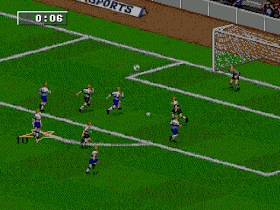 Genre: Sports
Perspective: Diagonal-down
Interface: Direct control, Multiple units / characters control
Sport: Football (European) / Soccer
Published by: Electronic Arts
Developed by: Extended Play Productions, XYZ Productions
Released: 1997
Platforms: SEGA Genesis / Mega Drive, PlayStation (PSX, PS1), Super Nintendo (SNES)
FIFA 98 Road to the World Cup - What is most amazing about this part is that just before the end of the console, the guys from EA managed to give SEGA Genesis a real diamond in her crown! The graphics have been redesigned and improved, the quality of sound effects has been improved, and the new interface design pleases. But that's not all, of course: the new Road to the World Cup 98 mode has been added. Now you'll have to fight for the World Cup first!
‹
›
Home
View web version