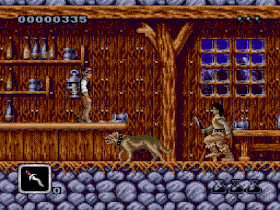 Genre: Action
Perspective: Side view
Visual: 2D scrolling
Narrative: Horror
Published by: Sony Imagesoft
Developed by: Psygnosis Limited, Traveller's Tales (UK) Ltd.
Released: 1993
Platforms: Super Nintendo (SNES), SEGA Genesis / Mega Drive, SEGA CD / Mega-CD, SEGA Master System, Nintendo (NES)
On the Super Nintendo, there are, of course, more worthy games to destroy evil spirits. This implementation, in principle, is also of a good level. The graphics are above average, the music pretty well emphasizes everything that happens. The action is not distinguished by any originality. The game will suit fans of the Francis Ford Coppola film of the same name, and those who want to refresh their feelings from playing the version on the Sega Genesis, where the game was more in demand. Here she was lost among her own kind. The young clerk of the London real estate agency Jonathan Harker, who intends to marry soon, receives an assignment from the management to go to Transylvania to a wealthy client - the local Count Dracula, who decided to purchase several castles in England. Unfortunately, Jonathan realizes too late that the Count is a vampire and that he was using him in hopes of leaving the cursed Romanian land in search of fresh blood. Single player game.
‹
›
Home
View web version