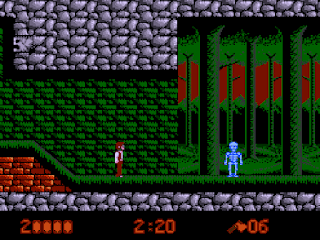 Genre: Action
Perspective: Side view
Visual: 2D scrolling
Gameplay: Arcade, Platform
Narrative: Horror
Published by: Sony Imagesoft
Developed by: Probe Software Ltd.
Released: 1993
Platforms: Nintendo (NES), SEGA Master System (MS), SEGA CD / Mega-CD
The player is under the control of the lawyer Jonathan Harker - a lawyer sent to Transylvania in Dracula's castle for the paperwork on the property, but suddenly he falls into a vampire trap.
The game does not copy the plot of the book, it is more than a standard platformer with monsters, different weapons, bonuses and other attributes of the genre. The main thing in the game is the atmosphere of darkness and mystery, which are done just fine. "Bram Stoker's Dracula" is one of the few NES games that almost 100% captures the atmosphere and spirit of the era unfolded in the story. The music is simply gorgeous, the tracks in the game freeze blood, the sounds fall exactly on the theme. The coolest thing here is day and night, no other game on the NES has anything like it! Accordingly, there are two modes of play and behavior during the passage: 1) daytime, when there are no monsters, and the enemies are birds and rare soldiers, and 2) nighttime, when all evil spirits come to life and start playing the appropriate tracks.
The levels are drawn very cool, the locations are large and there are many secret rooms in them. The action takes place in different places: in the countryside of Romania, an old village inn, Dracula's castle, its dungeons, in some parts of London, in the crypt of Lucy, Carfax Abbey and even in the cemetery.
‹
›
Home
View web version