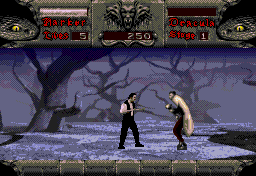 Genre: Action
Perspective: Side view
Art: Video backdrop
Gameplay: Fighting
Narrative: Horror
Published by: Sony Imagesoft
Developed by: Psygnosis Limited
Released: 1993
Platforms: SEGA CD / Mega-CD, SEGA Master System (MS), Nintendo (NES)
Unlike other versions of the game Bram Stoker's Dracula, the version of the game for SEGA Mega CD from Psygnosis and Sony Imagesoft is entirely based on the story of the same movie Dracula Bram Stoker. In the game there are FMV from the movie. Digitized characters make the game realistic. You have to go through eight levels and fight with various evil spirits, among which will be zombies. You have to play for Jonathan Harker, he works in a real estate agency, he is sent to Transylvania to Count Vlad Dracula, so that he would acquire several castles in England. But, unfortunately, Jonathan understands too late that Count Dracula is a vampire.
Infinite Lives: When "Beware" appears on the screen, press A, left, up, C, A, right, down to activate cheat mode. After that, at any time during gameplay, push the following button combination for infinite lives: Hold A, push start, start
‹
›
Home
View web version