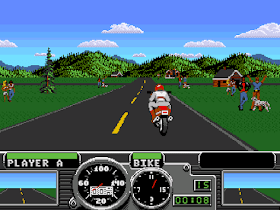 Genre: Action, Racing / Driving
Perspective: Behind view
Vehicular: Motorcycle, Street racing
Published by: Electronic Arts
Developed by: Electronic Arts
Released: 1992
Platforms: Amiga, SEGA Genesis / Mega Drive, SEGA Game Gear, SEGA CD / Mega-CD, SEGA Master System
We note right away that fans of later games in the series may find it less interesting and even boring, but this view will be superficial: real adrenaline does not appear here right away. On the other hand, the leisurely gameplay will appeal to fans of the first parts of the Test Drive series, which is related to this version of Road Rash not only by the theme of illegal competitions on public tracks, but also by the gameplay in general. The fact is that in Road Rash for the Commodore Amiga, motorcycles are initially made extremely massive and clumsy, unlike the Sega versions. Driving on the track in this approach becomes extremely conditional: the bike turns with the road, even if you do nothing, it just blows it a little. In such conditions, it is quite difficult to fly to the side of the road, so the main obstacle on the way to the first place will not be turns, and not rivals with the police, and not even scattered objects and road signs that you can hurt yourself painfully against - no, the most difficult thing here will be overtaking oncoming and passing traffic, especially at later levels, where motorcycles are even more massive, and speeds reach 140 mph.
Road Rash absorbed all the best that was in the arcade racing genre at that time: apart from the Test Drive series, there is certainly a lot in common with the Crazy Cars series, also dedicated to illegal racing on American tracks. To advance to the next level, you need to finish 5 tracks in the top four. Doesn't it remind Lotus? But, unlike this wonderful game, here you can replay one track as many times as you like, and you can also choose their order to your liking. In addition, there is a password system for continuing the game - a great relief, because it is unlikely that you will be able to go through everything at once. One race at the fifth level lasts about 10 minutes of real time, and often you have to replay. But the main thing that was implemented here for the first time is the ability to fight directly on motorcycles! When you catch up with one of the 13 opponents, you can hit him. There is even an opportunity to snatch the club, which some of the most aggressive characters are armed with, and hit on the heads with not empty hands.
It is worth noting that there is not as much violence in this game as it might seem. Mostly it's still a race, not a scuffle. Most opponents are extremely benevolent towards the player, give advice, some even specifically emphasize that it is not necessary to fight at all. On the track, they also behave quite passively and even politely: protracted battles, like in RR3 on the Genesis, when the opponent does not lag behind until you hit him properly, this is a rarity. It's nice that computer players try to play by the rules: they can also get hit by a car - however, only within your sight. It is impossible not to recall the first attempts to give individuality to the characters, who, although they look the same in the race, nevertheless differ markedly in the manner of play. But the main thing is that their portraits and phrases can be seen in the intro before the race. And you can read more about some characters in the user manual that came with the game.
Let's go back to the comparison with the Genesis version. In addition to the gameplay differences, it is necessary to note the clearer graphics in the Amiga version, as well as different music. But choosing Paulo or YM2612 is probably a matter of taste. In general, the port turned out to be extremely high-quality and corresponding to the original. All the same 5 types of track: desert, countryside, mountains, coast and forests. The interface is very similar, however, in the Amiga version the keyboard is used in the menu, not the joystick. There is also a shop here, which makes it possible to transfer to a more powerful "horse". To go there, you must press F3 on the screen with the results of the race.
Road Rash has become one of the real pinnacles of arcade racing, where the conventionality and unrealistic nature of what is happening are more than offset by the excitement of the game. Highly recommended to those who remember and appreciate Lotus, Test Drive, Crazy Cars and other great races of the distant past.
‹
›
Home
View web version