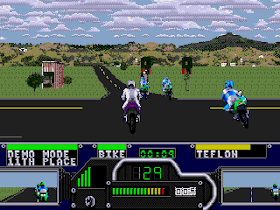 Genre: Action, Racing / Driving
Perspective: Behind view
Vehicular: Motorcycle, Street Racing
Published by: Electronic Arts
Developed by: Monkey Do Productions, New Level Software
Released: 1995
Platforms: SEGA CD / Mega-CD, SEGA Game Gear (GG), SEGA Genesis / Mega Drive, SEGA Master System (MS)
The legendary game of the Road Rash series for Sega Mega-CD. Some kind of this is the transition game Road Rash version for Panasonic 3DO and the version of the game for Sega MegaDrive, but to the level of Road Rash 3: Tour de Force the game still did not last. In the game there are FMV video clips the same as in the version for 3DO. And also great music. The game has five levels: The City, The Peninsula, Pacific Highway, Sierra Neyada, Napa Valley. You participate in illegal motorcycle races, which means that they do not have rules. You can beat your rivals with anything that they would not interfere with. But be careful that you do not fall by yourself and not be in the clutches of the police. Be careful and do not crash into signs and cars, because they can prevent you from reaching the finish line first. With the proceeds you can upgrade your bike.
‹
›
Home
View web version