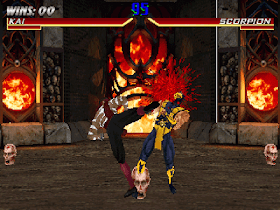 Genre: Action
Perspective: Side view
Gameplay: Arcade, Fighting
Published by: Midway Games
Developed by: Midway Games
Released: 1997
Platforms: Arcade Machine, PlayStation (PSX, PS1), Nintendo 64 (N64)
Mortal Kombat 4 is the first game in the MK series to be made entirely in 3D. In general, when transferred to 3D, the game retained the canons of the series. The most noticeable new feature in the gameplay was the ability to use weapons and some items in the levels.
The game is based on the confrontation between the fallen god Shinnok and the rest of the gods. Fighters from different worlds take part in the battle between Good and Evil, while the Forces of Light try to stop the Army of Darkness of Shinnok himself, who intends to conquer all the kingdoms.
‹
›
Home
View web version