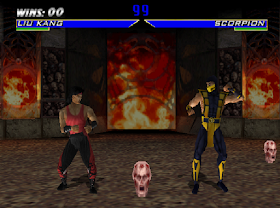 Genre: Action
Perspective: Side view
Gameplay: Arcade, Fighting
Published by: Midway Home Entertainment
Developed by: Midway Games
Released: 1998
Platforms: Nintendo 64 (N64), PlayStation (PSX, PS1), Arcade Machine
Despite the transition to 3D, the game is very similar to the previous fighting games of the series. In Mortal Kombat 4, the system of preprogrammed combos was abolished. Instead, a system was created that allowed the player to create combinations using the usual and special methods of fighters. True, due to the fact that in Mortal Kombat 4, as in previous games of the series, the strikes of the fighters almost did not differ among themselves, the new system turned out to be monotonous. Mortal Kombat 4 - the first game of the series, in which the characters were completely made in 3D instead of sprites. Textures for the characters were taken from the actors who played the characters in the previous games of the series, and the animation was created using the "motion capture" technology. At one time this technology was revolutionary, although the character models to date look obsolete. In Mortal Kombat 4 was presented a limited system of weapons, which allows using a small combination of buttons to get weapons. Each fighter has a different weapon, although many of them repeat each other. In Mortal Kombat 4 also there was an opportunity to move not only forward and backward, but also to make sajdsteps - small steps in the 3D plane. In Mortal Kombat 4, there was a limit on damage, which is called "Maximum Damage" - it turns on when one player deals damage to another more than the one set. This restriction allows you to prevent infinites (infinite combo), although it can be disabled using code. Due to mistakes in balancing the blows of the characters, Liu Kang was able to partially overcome the limitation at the expense of the combo, in which the last blow was dealt to the maximum damage, but was so strong that at a maximum damage limit of 48%, it allowed almost 70% combo.
Bonebreaker - the unofficial name of the technique used on the opponent when approaching closely and using the button of the upper kick. Unnaturally, the extremity was bent to the enemy, because of what he got the name of a bounbrucker (bone). Despite the same fighting styles, in MK4 each character had his own unique bounbercracker, which gave rise to a difference between fighters. Has replaced the usual throw from the first parts of Mortal Kombat. The role of the game is ambiguous, as in some characters, the bounce-baubers do more damage than others. Bonebrucker is not used on a lying opponent (except for Shinnok and Kuang Chi). Another feature of the game is the kickback of the opponent, which does not allow to use it constantly (as you have to approach the opponent closely). In subsequent games of the series, the bounbrucker was applied through the block.
‹
›
Home
View web version