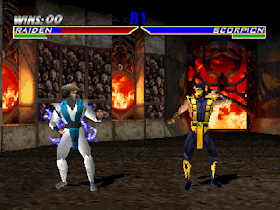 Genre: Action
Perspective: Side view
Gameplay: Arcade, Fighting
Published by: Midway Home Entertainment
Developed by: Midway Games
Released: 1998
Platforms: PlayStation (PSX, PS1), Nintendo 64 (N64), Arcade Machine
Finding in the gaming environment a person who does not know anything about the Mortal Kombat series is not an easy task. One of the first, truly bloody fighting games, which brought to the world all the beauty of Motion Capture - this is not forgotten. After the huge success of the first part, the developers, with an enviable consistency riveted the continuation, new characters appeared, the arsenal of old "acquaintances" was replenished with new and new techniques, but the essence, the game model, remained unchanged. And the truth is, why, tell me, change what is the object of the worship of millions. Progress, however, does not stand still. And so, in the fourth part, the developers still decided to indulge in the fashionable trend of moving the fighting games to a 3D environment and moved, but with an eye. You'll see - like all 3D, and characters, and backgrounds, and even blood. You will get accustomed - but no, the mechanics of the game are still the same, and the third dimension - so, the dog has the fifth leg. However, let's not go into lengthy discussions discussing the beaten topic of 2D Vs. 3D, and we will just enjoy the familiar face-mouthed.

The Midway development team decided to create a 3D game series Mortal Kombat, deciding to follow the growing fashion for 3D games. For this, Midway decided to create from scratch its own "iron" named "Zeus". This led to delays in the development and most of the game was tested on systems designed for 2D games with pre-rendered character models.
As he said in his interviews, Ed Boon, he was seriously concerned about maintaining the feeling of 2D gameplay, but with 3D graphics. At first he was worried that features inherent in 3D games would make this impossible. The main difference between 2D and 3D fighting games was that 3D fighting games were trying to simulate realistic martial arts. One of the reasons for this was done, the creators of the games wanted to take advantage of the smooth transition of frames and the method of "motion capture" (Motion Capture), using 3D models. For example, in Virtua Fighter, real masters of martial arts performed movements that were then superimposed on 3D models in the game. Thus, while a normal hand attack in a 2D fighting game can be done almost without delay after pressing a button, taking only two frames of the animation, a hand stroke in a 3D game occurs with a delay after pressing the button, making the animation more realistic.
The delay between pressing the button and impact, radically changed the gameplay in the fighting games. Boone decided to use the unrealistic speed of animation and movements inherent in 2D games, superimposed on 3D graphics. Thus, the gameplay in many respects was similar to the 2D games of the series. Although Mortal Kombat 4 came out earlier than the Street Figher EX series, the latter used more complex animation, which partially changed the gameplay. Some critics, however, were disappointed that MK4 was not played, like the other 3D games of that time.

New in the series