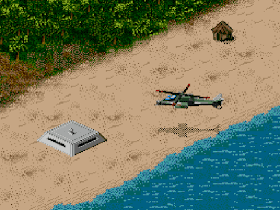 Genre: Action
Perspective: Diagonal-down
Visual: Isometric
Gameplay: Shooter
Vehicular: Helicopter
Published by: Black Pearl Software
Developed by: Foley Hi-Tech Systems, Granite Bay Software
Released: 1995
Platforms: Super Nintendo (SNES), SEGA Genesis / Mega Drive
Team Strike needs an incredible pilot. He must be professionally trained, an expert in air and ground attacks, capable of flying on a mission at any time of the day or night and performing it perfectly. The team needs you.
The main task of the team is the fight against terrorism.
As such, this game cannot be called a shooter, it is a game of some kind of its own genre. And the isometric perspective makes the game simply unforgettable and realistic.
‹
›
Home
View web version