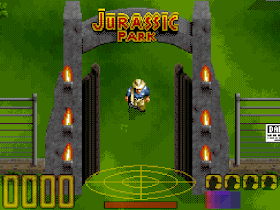 Genre: Action
Perspective: 1st-person, Diagonal-down
Visual: 2D scrolling
Published by: Ocean of America
Developed by: Ocean of America
Released: 1993
Platforms: Super Nintendo (SNES), Nintendo (NES), SEGA Genesis / Mega Drive, SEGA Master System, SEGA CD / Mega-CD
Someone will surely find the similarity of the game with the NES version. But only in part, since there is also an action mode in buildings (3D action). Dr. Grant is given several types of weapons to fight dinosaurs, including electric shocks. You need to look for ID-cards to access different buildings, use computers and the advice of friends. The goal is known - to escape from the island. Single player game.
Graphics and music at a very high level. Any unexpected appearance of a predator is not always possible to solve with brute force, so the weapons in the game are not always effective at some points. There are places that were chosen by the most voracious and large creatures of the Jurassic period. If you enter their territory, you will simply be eaten and trampled without the slightest chance of any resistance.
‹
›
Home
View web version