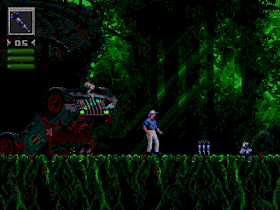 Genre: Action
Perspective: Side view
Visual: 2D scrolling
Setting: Sci-Fi / Futuristic
Published by: SEGA of America
Developed by: BlueSky Software
Released: 1993
Platforms: SEGA Genesis / Mega Drive, SEGA Master System (MS)
Ultimate Level Select Password:
In the password screen, enter JP_O_ARK as your password, with the first blank spot being either a G to be Grant or an R to be the Raptor, and the second blank being a number between 1 and 7 for each stage.
Note: If playing as the Raptor, then only use 1 - 5 on the second blank, because the Raptor only has 5 levels.
View Ending: BLUESKY1
So it is introduced in the world of entertainment, that the release of a good movie, it should be continued on the game console. Released in 1992, Jurassic Park was no exception. Thanks to Steven Spielberg's great directorial talent, JP took the lead in box office box office. And this meant that the creation of the game is inevitable. Developers had to sweat decently, so that the creation created by them could convey to the players similar feelings with those that they experienced while watching the movie. Released in 1993, JP for the gaming console SEGA MD received good reviews and deservedly entered the list of classics of virtual reality.

On a deserted island, not far from the coast of Costa Rica, millionaire John Hammond is engaged in the construction of the reserve. Everything that is connected with this project is surrounded by a deep secret. However, some circumstances (in particular, a number of accidents leading to the death of workers) makes investors reconsider their attitude to what is happening. They threaten to stop financing the project.
In the hope of obtaining an official conclusion regarding the safety of his reserve, Hammond invites a group of scientists to the island. Among them - the doctor of paleontology Alan Grant, paleobotanist Eddie Sattler and mathematician Ian Malcolm. Accompanies the scientists Donald Gennaro - a lawyer representing the interests of investors.
When they learned what Hammond was building behind the reserve, the scientists were in shock. It turns out that the island was intended for the creation of the "Jurassic Park", where the attractions were not carousels, but the genetically derived dinosaurs.
As might be expected, over time, predatory animals escaped from control and declared a hunt for humans. Now the task of all survivors to get out of the island and, if possible, to prevent the activity of ferocious creatures.
If in the movie all the characters acted together, then in the game we are imposed a slightly different turn of events. Namely, the game for Raptor - a dinosaur, trying to hide from its creators and Alan Grant - one of the visiting scientists. And they do not have to be friends with each other. Of course, their paths will be similar, but at the very end the winner will be only one. However, who they will be, it's up to you, dear players.

Levels, weapons and other features

When playing for Dr. Grant, we have to go through eight long stages. Running through the wilds of the jungle, plant, power station and no less dangerous territories, our hero will be pursued by all kinds of predators. And how many moments in the game, when Grant can break his neck, or smash to smithereens. Here it is necessary to show special caution.
In the arsenal, the doctor has not only darts with sleeping pills and electric shocks, but also explosive grenades and a shotgun. True, even with such a rich arsenal, you should not expect an easy victory, especially if you are dealing with triceratops.
For Raptor things will be very different. The dinosaur will not only cut a couple of levels, but will also simplify their passage. In principle, this is a fair decision, because the person's physical capabilities will not exceed the power of a dinosaur. Raptor and jumps wide, and runs around be healthy. And his attack kills the enemy subject with one blow.

If anyone remembers the games released for SEGA MD before the release of JP, then such people will appreciate all its contents with dignity.
Game characters are created using a digital image (as in the Mortal Kombat and Killer Instinct series of games). Dr. Grant certainly does not look a bit like his movie prototype - Sam Nile, but still watching his actions is quite an interesting lesson. The process of fighting a doctor with dinosaurs looks very spectacular. The outcome of the battle is sometimes unpredictable. So, for example, tritseratops, grabbing Grant with the help of his mouth, flinging him away from all the way (that's 5-10 meters).
At the sight of dinosaurs, the smile rises to the ears, I want to squeak with joy. Their movements are clearly worked out, even differences in the behavior of different species are taken into account. So, for example, we all know that raptors are living representatives, they always attack first, pterodactyls strive to cling to a victim with their claws when it is turned back, and tritseratops, despite all their complexion, will think three times before going on the offensive . And, as they all go off. Even the most unimpressive player will laugh at this.
Very beautiful and well-designed game environment. The scenery is done in a slightly gloomy background, but in this situation, it is rather a plus. Just imagine a raptor walking through one of the levels of "Tiny Toon". It would look very funny.
All the backgrounds clearly emphasize the levels of the game. So, for example, the jungle looks much more voluminous, and the stage with the museum will more than once please its sights.

No matter how I tried to listen to her motives, I could not appreciate her in any way. Under constant cries of enemies, dinosaurs and all kinds of noises do not really listen.

Both game characters are easily manageable. Their movements are not constrained, but there is more than enough plastics. This is especially true of Raport.
At first, playing for Dr. Grant, the player will feel some inconvenience. Basically, the difficulty is a constant change of weapons in battles with dinosaurs and rather complex obstacles that require extreme accuracy. But, with the management of Raptor, a five-year-old child can cope. Such indulgence is not enough, in what other game there are.

Before us is a game that has all the qualities to be called fascinating. The first positive side is the choice of characters, namely to play either for the savior of mankind, or for the predator-deserter. From this, as you understand, the further game process completely depends.
Passing the game for Dr. Grant, we often face difficult tasks that can drag the game for a long time. Often there will be situations that require a correct decision in a matter of seconds. Suppress the dinosaurs with the utmost care, never should be attacked, standing close to the enemy. Yes, and should carefully think through all before attacking this or that predator. Learn how to choose the right weapon, this will simplify some battles. Never run headlong, you can inadvertently fall down from some ledge. So, our doctor will fall through the ground, and the player will start the level again.
Walkthrough the game for Raptor is much easier. The speed with which he overcomes all kinds of obstacles, too, inspire respect. So, do not be surprised if you spend half the time on full passage than playing for Dr. Grant. The main thing that is required of you is to make precise jumps and destroy enemy subjects as often as possible. When attacking, try not to go ahead and, more often, use jumps. Jump Raptor can do pretty well, so it's never worth while disdaining this occupation.
‹
›
Home
View web version