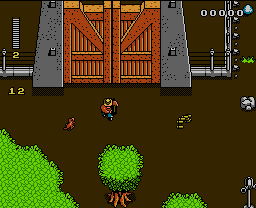 Genre: Action
Perspective: Diagonal-down
Published by: Ocean of America
Developed by: Ocean Software Ltd.
Released: 1993
Platforms: Nintendo (NES), Super Nintendo (SNES), SEGA Genesis / Mega Drive, SEGA Master System, SEGA CD / Mega-CD
Based on the famous movie "Jurassic Park". It turned out to be no less exciting than the movie itself. In Jurassic Park, the electric fence was de-energized and the dinosaurs got out of control. Many people are in trouble, your job is to save them. Cartridges are not endless weapons, so you need to save them and make up for them. As you go through the arsenal will expand. On each site it is necessary to collect all the eggs of dinosaurs, only then you will move forward. To open the gate or do something else, use the computer terminal. Boxes marked with a "?" Sign may provide you with a prize, or they may damage you. Dinosaurs painted quite realistically.

On the main menu screen, press DOWN, RIGHT, LEFT four times. Start the game and pause it. Click Select to jump to the next level.

During the passage, color belts will come across. The effectiveness of the ammunition in them will decrease from blue - to red - to green - to yellow. After hitting the target, the cartridges (yellow) must be picked up. With Select, you can change the type of ammunition. Pick up boxes with question marks, but be careful - some of them are mined.

At this stage, you will receive the task to save Tim from triceratops. Pressing button A, you will be at the entrance to the Jurassic Park. Taking the yellow bandolier, which is to the right of the hunter, and killing procomsogony, start destroying the eggs. They can be found at the fence, near giant trees, on the roofs of two houses. But be careful, as there are electric grills on the roofs. On the roof of the right house there is a safe box with a question mark. After destroying the eggs on the street, go to the left house, here you will find three eggs. Then in the right house find ten eggs. After destroying the eggs, go to the computer.
The cursor should choose the message: "Gate control" (right square). You will receive a message: "The main gate of the Jurassic period is open." After leaving the computer (Start), leave the house and go to the main gate of the Jurassic period. Go into them. Once in the clearing, approach Tim. Right away you will be attacked by a horde of triceratops. Keep Left. After running these pangolins get a message for the next level.

The message contains an order to find the kidnapped sister of Tim Lexi and save her. On the avenue of the park, destroy eight eggs. Then go to the vivarium, where you need to find and destroy ten eggs. At the next stage, take the boat up the river, to the final pontoon (A and Turbo A - paddles with oars). In this case, do not forget to destroy the eggs (you have to swim on them). Having reached the pontoon, get to the clearing, where Lexie stole to you. To destroy the ziratosaurus, shoot him in the head when he presses it to the ground.

The message suggests: 1) Turn on the generator on the wall, 2) go to the main computer and fix the computer system.
Start your way with the main generator, which is in a small house. At this stage, do not touch two boxes with the question, located near the hunter. Continue to destroy eggs, seventeen of which - on the street and two - on the main computer (big house). Having finished with the eggs, go to the main generator and turn on four switches on the red shields (the "ON" position). Then go back to the main computer to fix the computer system. The sequence of fixes is strictly defined.
When the system is fixed, the following messages appear:
TERMINAL BOOTING ... (The order is correct ...),
SYSTEM OK ... (Computer is fixed),
SYSTEM MESSAGE BOOT UP NEXT TERMINAL
(Look for the following order of correction), MESSAGE ENDS (End of message). Having corrected seven computers and went to
Eighth, you receive a message: "System
Fixed, power on ».

The task at this level is to find a nest of dinosaurs and destroy them with explosives. It is necessary to destroy twenty eggs on the ground, on the mountains and on the house. Go into the house and take three hour mines. Go to any of the three caves (dark holes). Caves are mined in the places of cross-designation, only after the destruction of all eggs in them. Having mined these places, leave the cave more quickly. After blowing up all the caves, go to the next level.

Your task, which you will receive in the next message - to destroy the lizards. It is necessary to seize the pier and use the radio on board the ship. At the wharf, twelve eggs must be destroyed. Some pontoons are under tension, they need to jump over. The path to you will be blocked by ichthyosaurs, suddenly jumping out of the water. Be careful when you see running tritseratopsov. When the flock is past, head to the ship's deck, here you must find and destroy fourteen eggs.

The message of this level is: "The helicopter is on the way. Look for a helicopter pad for take-off and your safety. " Destroying nine eggs on the street (the remaining eleven on the roof of the house), and sticking to the left side, find the right entrance to the first room. After destroying twenty eggs in it, move all the way to the right, where you will find the exit door. Leaving the room and destroying the corresponding area of the roof of the egg, enter the other door. Behind it, in the second room, destroy ten eggs. In this case, too, move to the right and go out to the right door. On the next section of the roof, destroy five eggs. After that, go back to the first room, where you need to go to the middle door to the roof, and destroy one egg. Go to the second room and go out into the middle door and on the roof destroy another egg. Return to the first room - and through the left door you leave the house. Then left side you go to the vivarium, where under the crowns of huge trees you will find three eggs. After that, get the information that Tim and Lexie abducted the zyrotosaurus. They must be saved, and the cytosaur must be destroyed. In the battle with this raptor, use the tactics of combat used in the second level. If you win, you will receive a message that the Jurassic Park has been released.
‹
›
Home
View web version