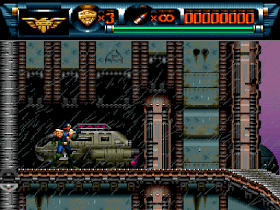 Genre: Action
Perspective: Side view
Visual: 2D scrolling
Gameplay: Platform
Setting: Sci-fi / futuristic
Published by: Acclaim Entertainment
Developed by: Probe Entertainment Ltd.
Released: 1995
Platforms: Super Nintendo (SNES), SEGA Genesis / Mega Drive, DOS
Judge Dredd is an action-packed platform game based on the British comic of the same name, as well as the 1995 film starring Sylvester Stallone. The game was released for multiple systems, and uses the standard console run-jump-shoot formula, although it does add unique features, such as by injuring an enemy, you can force them to surrender and arrest them. The plot component of the game follows in the initial levels what happened in the film, namely: the arrested Dredd was sent to the Aspen Penal Colony, from where he must get out and prove his innocence. After the fight at the top of the Statue of Liberty, which is how the movie ended, the game continues, but it is already filled with levels and characters from the original comic, and it all ends with a climactic battle with the Judge Death. The game is very dynamic, exciting and is recommended to all fans of a good action movie and just those who are interested in the world of Judge Dredd.
‹
›
Home
View web version