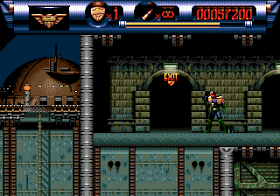 Genre: Action
Perspective: Side view
Visual: 2D scrolling
Gameplay: Platform
Setting: Sci-Fi / Futuristic
Published by: Acclaim Entertainment
Developed by: Probe Software Ltd.
Released: 1995
Platforms: SEGA Genesis / Mega Drive, DOS, Super Nintendo (SNES)
The game is based on the movie of the same name. In the courtyard of the 22nd century and you are Judge Dredd. Police and courts are gone, Now all the work is done by the judges in revenge, they decide to make a death sentence or detain the offender. Despite the fact that the game was made for the film, the game has many elements taken from the comics 2000 AD. In the game you have to perform different tasks, in different places. As you progress through the round, you will decide whether to detain the criminal or kill him. But the ending of the game is at odds with the film and is more focused on comics. There is blood in the game.

Enter the code at the "A Probe Development" screen. A sound effect will play if the code was entered correctly. The level select menu will appear when starting a new game. The MUSIC / SFX option is added to the main menu after the title screen.
B, A, down, left, A, down, A, B, C.
‹
›
Home
View web version