Eye of the Beholder (SNES) 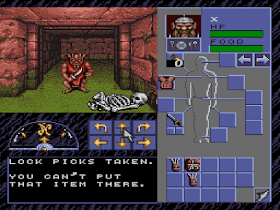 Genre: Role-playing (RPG)
Perspective: 1st-person
Pacing: Real-time
Gameplay: Puzzle elements
Interface: Point and select
Setting: Fantasy
Published by: Capcom U.S.A.
Developed by: Westwood Associates
Released: 1994
Platforms: Super Nintendo (SNES), SEGA CD / Mega-CD, DOS
Legendary RPG. And it all started with the fact that in the distant 70s. modest dreamer Gary Gygax came up with the idea of creating a kind of representative of the genre. His efforts spawned Dungeons & Dragons, one of the most famous "monsters" of the RPG genre, which set the standard for subsequent creations of the time. Soon the series acquired its own universe, its own concept and its own world. Of course, fans also started showing up in huge numbers. AD&D still continues to have a strong subsequent influence on the entire gaming industry, spawning new products in its universe, as well as many other successful franchises. Here we are given to play one of the parts of this great game. Four heroes have been summoned to the city of Waterdeep to investigate a mysterious evil that lives in a network of dungeons and catacombs beneath the city. "This is the game that made me fall in love with RPGs. For me it's a great classic. But for others, it's just going to be a boring dungeon." Lots of spells and lots of characters, simplified controls that fit the interface to the joystick and, very well, great graphics and sound. All this is present on the Super Nintendo. Worthy implementation of a cult game.
‹
›
Home
View web version