Eye of the Beholder (SEGA-CD) 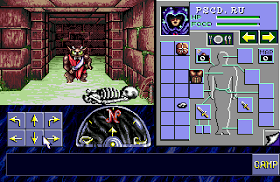 Genre: Role-Playing (RPG)
Perspective: 1st-person
Gameplay: Puzzle-solving
Pacing: Real-Time
Setting: Fantasy
Published by: SEGA of America
Developed by: Westwood Associates
Released: 1994
Platforms: SEGA CD / Mega-CD, DOS, Super Nintendo (SNES)
Once the game Eye of the Beholder from the creators of Advanced Dungeons & Dragons was one of the most popular RPGs, performed in pseudo 3D, in which you had to wander through the labyrinths and corridors of the dungeon. In the version of the game for Sega Mega-CD there is an exclusive music track from Yuzo Koshiro. The plot of the game is simple: The Lord of Waterdeep hires a team of mercenary adventurers, in whose role you will perform, in order that they stop the evil coming from under the city. You choose four characters, there is a good to choose from. And go to the city dungeon - the sewerage, made of labyrinths and catacombs. But the door behind you is closed, and there is a collapse, closing your way back. Our heroes have nothing left but to go forward to fulfill their duty - to destroy Xanathar and find the way home, after returning heroes.
Also the game is known also under other names: Advanced Dungeons & Dragons - Eye of the Beholder.
Also, the version of the game Eye of the Beholder and for Atari Lynx was planned, and this would be the first RPG on this platform. But the game never came out.
‹
›
Home
View web version