Eye of the Beholder (DOS) 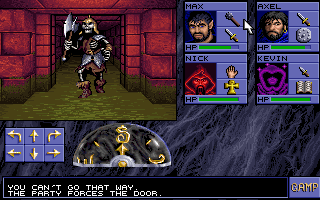 Genre: Role-Playing (RPG)
Perspective: 1st-person
Pacing: Real-time
Gameplay: Puzzle elements
Interface: Point and select
Setting: Fantasy
Published by: Strategic Simulations
Developed by: Westwood Associates
Released: 1991
Platforms: DOS, SEGA CD / Mega-CD
This is the first part of a wonderful trilogy full of adventure, danger, surprises and mysteries. We have to go through 12 underground levels, making our way through hordes of enemies, helping the good guys dwarves on the way, overcoming tricky obstacles, gaining knowledge and experience, discovering useful and not so secrets.
First of all, you need to make a party of four characters. Later you can take two more NPCs, if, of course, you need them. The character generation process is very funny: first you need to select the desired race and class, and then using the Modify button, you can increase all the characteristics and the amount of his health to the maximum. A trifle - but nice. Multiclass heroes are a dubious acquisition, as they develop too slowly. A warrior / cleric / mage by the end of the game, maybe, will learn how to cast a poison slowing spell, but you will have to forget about good healing spells. An ideal party is two fighting characters in front (warrior, ranger, paladin) and a mage with a cleric in the back, and all classes are pure, not mixed. Thief is a completely useless class, since there are keys for all doors.
If you are going to import your party in the next parts of the trilogy, then take into account the restrictions on class development for different races, which are described in the manuals. It will be a shame to find out in the third part that the cleric dwarf is not able to rise above the 12th level, while 20 levels are available for other races.
In addition to the usual adventures, our heroes are also waiting for unusual ones. At each level of the dungeons there is a special quest, for the completion of which some kind of reward is issued. Some of them are witty and, using a hint and a certain amount of imagination, they can be found and executed. However, others are so illogical and devoid of any clues that you can dig over them for the rest of your life, unless you accidentally hit the sky with your finger. These special quests do not affect the passage of the game in any way, so decide for yourself - to mess with them or not.
‹
›
Home
View web version