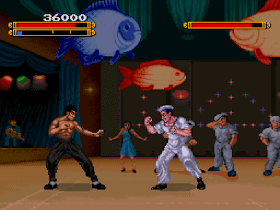 Genre: Action
Perspective: Side view
Gameplay: Fighting
Narrative: Martial arts
Published by: Acclaim Entertainment
Developed by: Virgin Interactive Entertainment (Europe) Ltd.
Released: 1993
Platforms: Super Nintendo (SNES), Atari Jaguar, SEGA Game Gear, SEGA Genesis / Mega Drive
This is an interactive story about the legendary martial artist. You play the role of Bruce Lee, the legendary fighter. Who doesn't know about Bruce Lee? Everyone grew up on films with his participation. We have a lot of fights in which invaluable experience of a fighter is gained. Walk this path with the invincible Bruce Lee.
This is an interactive story about the legendary martial artist. Based on the film in which Bruce was played by his son Brandon Lee (The Crow).
A rather original fighting game - there are no fireballs and lightning, only hand-to-hand combat. Some may not like it, but the number of different strokes will pleasantly surprise you.
‹
›
Home
View web version