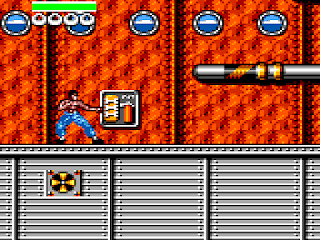 Genre: Action
Perspective: Side view
Visual: 2D scrolling
Gameplay: Platform
Narrative: Martial arts
Published by: Acclaim Entertainment
Developed by: Virgin Interactive Entertainment (Europe) Ltd.
Released: 1993
Platforms: SEGA Game Gear (GG), Atari Jaguar
The player controls Bruce Lee and must, among other opponents of Lee, defeat a sailor (at a disco in Hong Kong), a chef from a Chinese restaurant in San Francisco, and a martial artist who challenges him. In these battles, reference is made to the main battle scenes from the film. However, the game does not include valuable plot information from the film, as well as much of the romantic relationship between Bruce Lee and his future wife.
Players can use a set of punches to defeat the opponent. Successful execution of the blow allows you to gain a sufficient amount of chi energy, which makes it possible to use special techniques. The game is known for its complexity: only experienced players can get to the last levels and complete the game. The player has three options to continue the game in case of defeat, and if they are used up, a battle takes place with an almost invulnerable Ghost (the personification of Bruce's fear, which takes the form of a Japanese samurai in armor). If he wins, the player can continue playing. The ghost is also the final boss in the game.
Up to 3 players can participate in the game at the same time, who can go through the game together or fight with each other in the battle mode. Additional players also control Bruce Lee "clones" with different pants color.
‹
›
Home
View web version