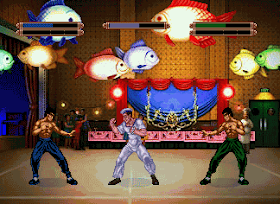 Genre: Action
Perspective: Side view
Gameplay: Fighting, Martial Arts
Published by: Atari Corporation
Developed by: Virgin Interactive Entertainment (Europe) Ltd.
Released: 1994
Platforms: Atari Jaguar, SEGA Game Gear (GG)
Game Dragon: The Bruce Lee Story is a fighting game that tells the story of the life of the great Bruce Lee based on the movie "Dragon: The Story of Bruce Lee." As you can see, you have to fight by Bruce Lee himself and defeat many enemies, including fighting with the ghost of the samurai (Bruce Lee's fear). The game is quite complicated, and that it will not be much to practice it. What is noteworthy, the game has three attempts to continue the game, if they are used up all, the player will have the opportunity to fight with a virtually invulnerable phantom. After the victory over which the player can continue the game. Like hell in the game Herc's Adventures. The game version for Atari Jaguar is much more detailed than the SMD and SNES. The game mode is supported for several players, and you will play together, which makes the game even more fun.
‹
›
Home
View web version