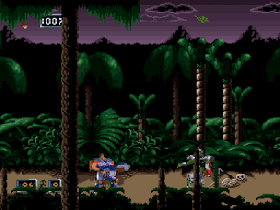 Genre: Action
Perspective: Side view
Gameplay: Platform
Published by: Playmates Interactive Entertainment
Developed by: Adrenalin Entertainment
Released: 1995
Platforms: Super Nintendo (SNES), SEGA Genesis / Mega Drive
Doom Troopers was considered to be one of the strongest action games on the Sega Genesis and was therefore also released for the Super Nintendo. The differences are very significant. First of all, improved graphics and sound effects. New features have been added, for example, to grab the enemy and shoot him at close range, it looks very impressive and more brutal than other features. Also, the levels have been changed, some of them have added other secret passages and the location of enemies. So from the game you get a completely different experience. It all looks at least as good as on the Sega Genesis. You have to prevent the invasion of the Dark Legion warriors led by Algernoth - terrible aliens who have occupied the solar system. Our heroes Mitch Hunter and Max Steiner deal with unfriendly invaders with merciless cruelty, leaving behind only bloody stains and pieces of meat. You can play as one of two soldiers who have different weapons and melee styles. Graphic and sound effects are implemented quite well. In general, a fairly good action game for 1-2 players.
‹
›
Home
View web version