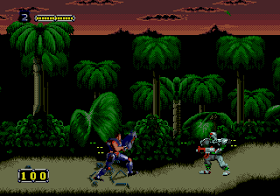 Genre: Action
Perspective: Side view
Gameplay: Platform
Published by: Playmates Interactive Entertainment
Developed by: Adrenalin Entertainment
Released: 1995
Platforms: SEGA Genesis / Mega Drive, Super Nintendo (SNES)
Great game, competitor to Contra Hard Corps. The game has beautiful animation that pleases the eye. You can choose from two characters Mitch Hunter and Max Steiner. Each of the characters has a special weapon and fighting style. You must stop the invasion of the Dark Legion on earth, and destroy their leader Algernoth. The game is one of the most brutal and bloody for the Sega MegaDrive. So if you like such games, then this game is for you. Destroy crowds of monsters, aliens and other creatures, and of course, a variety of Leaders and locations will delight you.
In the game mode for two players, it becomes more fun to play.