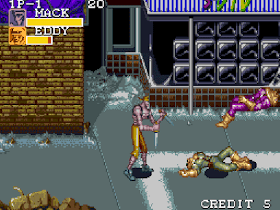 Genre: Action
Perspective: Side view
Visual: Fixed / flip-screen
Gameplay: Beat 'em up / brawler
Setting: Sci-fi / futuristic
Published by: Capcom U.S.A.
Developed by: Capcom Co.
Released: 1995
Platforms: Super Nintendo (SNES), Arcade Machine, PlayStation (PSX, PS1)
In a post-apocalyptic world populated by cyborgs and mutants, the only hope for justice is Captain Commando and his comrades. This character is almost a symbol of the company that created it. If you take the first three letters of each of the words and put them together, you get Capcom. The arcade version looks, of course, much better, but this port is not implemented from the best side. One way or another, the implementation may appeal to fans of all sorts of fights and classic arcade games. Game for 1-2 players.
‹
›
Home
View web version