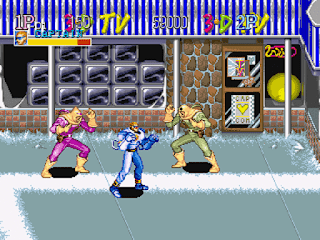 Genre: Action
Perspective: Side view
Visual: Fixed / flip-screen
Gameplay: Beat 'em up / brawler
Setting: Sci-fi / futuristic
Published by: NEW Corporation
Developed by: Capcom Co.
Released: 1998
Platforms: PlayStation (PSX, PS1), Arcade Machine, Super Nintendo (SNES)
Earth, Metro City, 2026. The corrupt group of Scumocide mutants controls the universe. Our hero, Captain Commando, gathers a group of renegades: Ginzu the Ninja, Mack the Knife, Mummy Commando and 2-year-old Baby Head genius to overthrow Scumocide. This is not an easy task, since almost all institutions on Earth are controlled by the Syndicate, but it seems that this does not stop our heroes. Choosing one of four characters, the player sets out on a campaign through hordes of genetically enhanced criminals. At the end of each location, a Boss is waiting for you, who must be defeated before moving on to the next level. The battles take place on the territory of the Bank, Museum, Circus, Oceanarium and a number of other places, the final stop will be the planet Callisto, where the Scumocide leadership is based. All four characters have their own special attacks, for example, the Captain can shoot plasma from his hands through his suit, Baby Head beats in a fur suit allowing him to inflict the most damage, and Mack the Knife is a knife thrower.
‹
›
Home
View web version