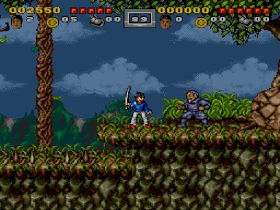 Genre: Action
Perspective: Side view
Visual: 2D scrolling
Gameplay: Platform
Published by: Sony Imagesoft
Developed by: Malibu Interactive
Released: 1994
Platforms: Super Nintendo (SNES), SEGA Genesis / Mega Drive, SEGA CD / Mega-CD
An adventure platform game based on the 1994 film of the same name in which the player has to help an old sword master in obtaining a magical dagger that unlocks a treasure cave. Three young ninja brothers will help him in this, for each of which there is an opportunity to play. On the way they will get up various obstacles, in the form of huge rolling boulders, spikes, wild animals, as well as other ninjas from the clan of competitors. As a defense, the acrobat brothers use katana strikes, throwing darts and bombs, as well as ordinary jumping kicks. In addition to the standard platform levels in the game, there will also be stages with a first-person perspective, where in the first of them you need to roll along the road and, dodging cars and ninjas, gouge the boss. In the second similar level, the player will already be asked to fly. Also, each level has a limited amount of time to complete. To play it was more fun, a game in a cooperative for two is provided.
‹
›
Home
View web version