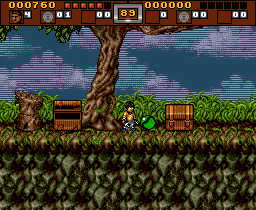 Genre: Action
Perspective: Side view
Visual: 2D scrolling
Gameplay: Platform
Published by: Sony Imagesoft
Developed by: Malibu Interactive
Released: 1994
Platforms: SEGA Genesis / Mega Drive, SEGA CD / Mega-CD
The game is based on the movie of the same name "3 Ninjas Kick Back". The plot of the game is also based on the plot of the movie. Three brothers go to Japan to help their grandfather restore a long-lost relic.
The main characters of the game are three brothers: Rocky, Colt and Tum-Tum. Each of them has some unique abilities. Knows how to handle a certain type of weapon. As for the gameplay, this is a normal platformer, in which you need to go through combat with opponents, collect various items, and, of course, reach the end of the level.