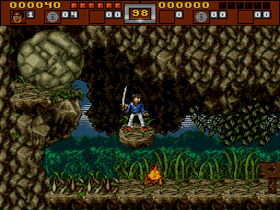 Genre: Action
Perspective: Side view, 1st-person
Visual: 2D scrolling
Gameplay: Platform
Published by: Sony Imagesoft
Developed by: Malibu Interactive
Released: 1994
Platforms: SEGA CD / Mega-CD, SEGA Genesis / Mega Drive, Super Nintendo (SNES)
The game is based on the film of the same name. It all began fifty years ago, when a samurai master participated in a ninja tournament to win a magic dagger, which, as legends say, is the secret key to the cave of wealth. After winning the tournament, he received a dagger, but it was kidnapped by his main rival Koga. He searched everywhere, but he could not find any traces of a dagger or Koga. Now he was too old to continue his search on his own. And he sends three of his young ninja brothers apprentices: Rocky, Colt and Tum-Tum.
You can play as one of three brothers, each of them has special techniques and tricks. There is also a two-player game. Basically the gameplay of the game is exactly the same as in the Sega Genesis / Mega Drive version of this game 3 Ninjas Kick Back. There are differences in graphics, as well as levels made in pseudo 3D. In which you have to fly on a hang glider, race along the roads of towns, fighting off rollers with shurekens and chasing a car.
‹
›
Home
View web version