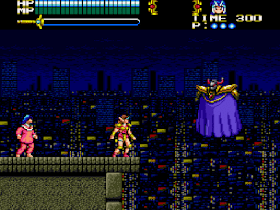 Genre: Action
Perspective: Side view
Visual: 2D scrolling
Art: Anime / Manga
Gameplay: Platform
Published by: Renovation Products
Developed by: Shin-Nihon Laser Soft Co.
Released: 1991
Platforms: SEGA Genesis / Mega Drive, TurboGrafx-CD (PC Engine)
Once again, Yuko Asou will have to confront the representatives of the Dark World and its new master, King Glames. The Dark World is rapidly collapsing and Glames is ready to do anything to save his subjects from certain death. This time, not only the fate of Vekanti is in question - the future of the Earth is also at stake! The main innovation of Valis III is the ability to play as multiple characters. Initially, only Yuko is available, but then the young warrior Cham and the sorceress Valna will join her. Yuko is physically strong, Cham is a balanced character with a ranged flail attack, and Valna is excellent at magic. You can change heroines at any time, except for the battle with the boss. In general, this is still the same solid platformer as the first part - with good graphics, good music and an interesting plot.
‹
›
Home
View web version