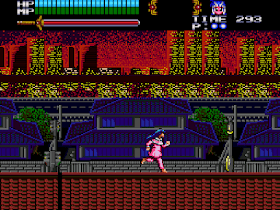 Genre: Action
Perspective: Side view
Visual: 2D scrolling
Art: Anime / Manga
Gameplay: Platform
Published by: NEC Home Electronics (U.S.A.) Inc.
Developed by: Shin-Nihon Laser Soft Co.
Released: 1992
Platforms: TurboGrafx-CD (PC Engine), SEGA Genesis / Mega Drive
Someone from the Dark World raises his head once more. This is King Glames (or Ramses, as in the American version), who has recently revived and managed to kill two defenders of the world. Yuko must stop him, otherwise the magical world will end, and the rest of the worlds will follow. The story itself begins on Earth, when you find out that someone has stolen your unique Valis sword...
The weapon has a good feature - it attacks not only with its iron, but also with energy power. By the way, some characters in the game will join you, so you can play as them (you can switch to them at any time, just not during the boss fight). In addition to the sword, there is also magic - as many as three varieties: three fiery swords, freezing and bombs (it's a pity that each hero has one magic).
‹
›
Home
View web version