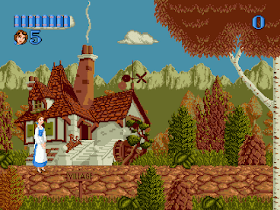 Genre: Action
Perspective: Side view
Gameplay: Platform, Puzzle elements
Published by: Sun Electronics Corp.
Developed by: Software Creations Ltd.
Released: 1993
Platform: SEGA Genesis / Mega Drive
Beauty and the Beast, one of the fairy tales that was filmed in the Walt Disney animated film. This game is based on this cartoon. Belle learns that her father has been kidnapped. Belle has a difficult task ahead of her, besides the fact that she must free her father, so she still needs to disenchant the monster into a handsome prince. This game is a mixture of platformer and quest. In order to complete the game you have to communicate with the local population to solve various puzzles and reveal secrets. In order to pass the first level, Belle will have to use her charm and ingenuity. You also have to learn various rumors from local residents. Then you have to ride a difficult path on the faithful horse Philipe. To the dark forest, through which you have to go to the castle. But the hardest part will be in the castle. This game is closest to the animated film.
‹
›
Home
View web version