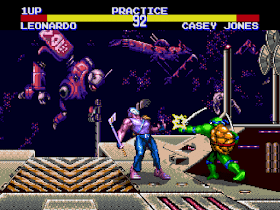 Genre: Action
Perspective: Side view
Gameplay: Arcade, Fighting
Narrative: Martial arts
Published by: Konami (America)
Developed by: Konami Co.
Released: 1993
Platforms: SEGA Genesis / Mega Drive, Super Nintendo (SNES), Nintendo (NES)
A beautiful and dynamic fighting game starring the cartoon characters Teenage Mutant Ninja Turtles. The turtles' teacher and mentor, Splinter, was kidnapped by four purple clones of the ninja turtles. Krang contacts the Turtles and tells them that the kidnapping is his doing. Now, in order for the turtles to return their teacher Splinter, they need to get into Dimension X. The heroes of the game will have to fight with all the clones of the main characters and in addition to this and with the bosses: Triceraton, Krang (Krang's Android) and Karai. The following heroes are available to the player: April O'Neil, Casey Jones, Ray Fillet, and Sisyphus. The game has several game modes, including a mode for two players. You can adjust the speed and strength of the impact in the game. There are also some other settings.
‹
›
Home
View web version