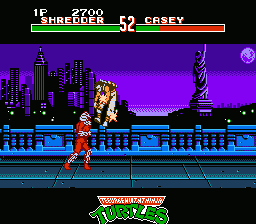 Genre: Action
Perspective: Side view
Gameplay: Arcade, Fighting, Martial Arts
Published by: Konami
Developed by: Konami Co.
Released: 1993
Platforms: Nintendo (NES), Super Nintendo (SNES), SEGA Genesis / Mega Drive
In an effort to make the game-fighting on the turtles ninja company Konami has not bypassed and the NES. The eight-bit version Tournament Fighters only 7 characters: Leonardo, Raphael, Michelangelo, Donatello, street fighter Casey dragon Hothed and Shredder in the role of the main villain. There is a scene mode, where you play for a turtle-fighter against the Shredder and his friends; Game modes for two games against the computer, and a tournament in which the game is who you want against anyone they want. Fighting, despite the small number of characters, we got standing: responsive management, techniques are performed easily, visual and sound effects are quite good. What can I say, on the NES at all left very little martial arts games and Tournament Fighers is worthy among them the title of "the best".

Decide on the mode (type of tournament) in which you will play. To do this, select the items you need from the menu:
A) "STORY" - take the turtle to your liking, take part in qualifying matches and, if you defeat your comrades, go to the Manhattan tournament.
B) "VS CPU" - take any fighter (from Leo to Shredder) and arrange a duel with any opponent. You can assign fighters by pressing ⇨ or ⇦ to select the place of the match ("WATER FRONT", "PIRATE SHIP", "DOWN TOWN" or "SEWER"), and by pressing ↑, adjust the strength of each fighter's beats from 1 to 7 (here you need to use Both joysticks).
C) "VS PLAYER" - similar to "VS CPU", but here compete two people with different joysticks.
D) "TOURNAMENT" is a kind of small tournament for four participants. The selection of characters is completely arbitrary, except for a small restriction: only one Hothead can compete in a match. The developers of the game wanted to make sure that dragons in general under no circumstances could come together in a "comradely" duel, because when two such monsters begin to move simultaneously, the image of the figures flashes in the most bizarre way. However, in "VS COMPUTER" the program does not take into account all the subtleties, and there you can cheat, but there are no tricks here. Any participant can be either a person ("MAN", you can even write four letters of your name) or a computer fighter "CPU" item.) The selection of fighters is done with the joystick and the A or START buttons, and the B or Turbo-B button cancels the selection.
E) Break through to the tournament final, we advise you to check whether the joystick is in your hands: during the last disassembly, the winner of the first battle listens to the left joystick, the second winner to the right, regardless of which joysticks controlled their actions during the semifinals.
E) "OPTION" is a collection of all possibilities. Here, the items are selected by pressing the arrows, as well as the A and B buttons.
Learn with management and keep in mind that you should not really hope for invincibility of protection. Super attacks and energy shoots reduce life energy (albeit not much), even if you put the block, and the only defense against the throw - or throw the opponent before he or you, or keep at a good distance all the time.
If you quickly double-press the joystick in the direction of the opponent, your fighter will run and, instead of hitting with his fist or leg, will carry out a powerful attack in a horizontal flight, but such an attack should be used carefully - the risk is great to run into a throw.
‹
›
Home
View web version