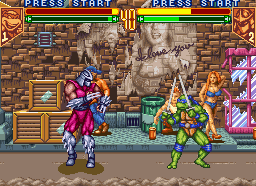 Genre: Action
Perspective: 3rd-person, Side view
Gameplay: Arcade, Fighting, Martial Arts, Platform
Published by: Konami (America)
Developed by: Konami Co.
Released: 1993
Platforms: Super Nintendo (SNES), Nintendo (NES), SEGA Genesis / Mega Drive
The state holds a public martial arts tournament, many fighters participate, including Shredder. Turtles suspect that he planned something this time, but later this is not discovered. This is the only game about turtles, in which they fight not to save the city or any of their friends, or to stop the villainous plan - here they do it in fact just for the sake of money and fame, and also because they were asked to This Splinter. Unlike most of their stories, turtles here act in public and even give interviews on television.This game does not use 6 attack buttons (as in Capcom fighting games), here we use a four-button scheme for weak and strong attacks (as in most fighting games from SNK). A special feature is the possibility of using special super receptions. To achieve this, the player must fill the green indicator. After filling it, pressing two buttons of a powerful attack simultaneously the player performs a super reception. As in the NES-version, there is the possibility of increasing the speed of the game, making battles more intense.In addition to the main modes, there is also a story mode in which the turtles must save April O'Neill and Splinter. Only turtles can participate in this mode. There is also a viewing mode in which the CPU monitors both fighters.
The game has ten initially available characters and two bosses. In addition to turtles and Shredder (which appears under the name of Cyber Shredder) there are:
War is a monstrous purple creature with large claws, one of the four horsemen of the Apocalypse (as evidenced by the TMNT comics of Archie, nevertheless, in the game it is considered an alien);
Asuka is a female ninja, participates in the tournament to open her own dojo for the money she has won. In addition to this game, more in the universe TMNT does not appear. In one of the debug beta versions of her unfinished sprite bears the name of Mitsu - a reference to the character of the same title of the feature film "Teenage Mutant Ninja III";
Wingnath is a humanoid, an alien-bat, who appeared in several Archie comic books and once in a cartoon. The game lacks his constant companion - the humanoid humanoid Skrilus;
Hromdom - android, one of the cartoon characters, was originally created by Shredder for the destruction of turtles;
Armaggon is a mutant shark from the future. Like War, the comic book hero Archie. In the animated series of 2012 - the villain hired by Lord Dregg to stop the turtles.

Rat King is a man who has lost his reason and considers himself a rat. In the original Mirage comic, it is unclear that he may be the spirit of death.
Karai is a former leader of the elite of the clan Foote, who appeared in the comics of Mirage and in the 2003 animated series. Since she was unknown to the fans of the animation series, and because of the face of her sprite in the game, some thought Karai was a male character. This could also be due to her rather universal style of dress. The official guide to the game depicts her more feminine.
Japanese version of the game underwent several changes:
In the Rat King's arena, fighters can break both walls and expand the arena;
Repainted sprites of some characters (Donatello, Asuka, Karai and Wingnath), for Asuka also replaced part of the animation;
Supercore Asuka replaced by a double uppercut;
The voices of the scoring are completely rewritten. Some fragments are taken from the arcade version of the game "Teenage Mutant Ninja Turtles: Turtles in Time"On the cover of the version for Europe and the US, Donatello fights with Armaggon. The cover of the Japanese version of the game is made by Takemasa Miyoshi - designer and lead programmer of the game.
‹
›
Home
View web version