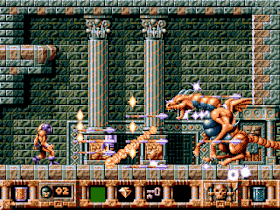 Genre: Action
Perspective: Side view
Visual: 2D scrolling
Gameplay: Platform, Puzzle elements
Interface: Direct control
Setting: Classical antiquity, Fantasy
Published by: Mindscape
Developed by: Bitmap Brothers
Released: 1992
Platforms: SEGA Genesis / Mega Drive, Super Nintendo (SNES), DOS
This game has three great elements to play this game for. The first is graphics. Especially when you consider the release date of Gods for this console (and it came out on others), it is excellent. The second is the music, which very accurately emphasizes the action of the game. Well, and the third, the most important - the gameplay. Believe me, there has never been anything like this on Sega Genesis! The guys from Bitmap Brothers successfully diluted the boring elements of the platformer with dynamic action. Playing as a guy in an iron mask who needs to get through the labyrinths of an ancient castle and crowds of monsters is simply exciting from the first minute.
‹
›
Home
View web version