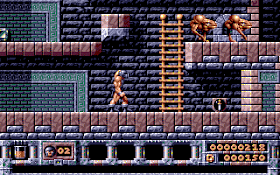 Genre: Action
Perspective: Side view
Visual: 2D scrolling
Gameplay: Platform, Puzzle elements
Interface: Direct control
Setting: Classical antiquity, Fantasy
Published by: Konami
Developed by: Bitmap Brothers
Released: 1992
Platforms: DOS, Super Nintendo (SNES)
This game belongs to a large class of dynamic-logic games, where the hero wanders through the maze, destroying whole herds of evil monsters and solving puzzles with tricky unpretentious levers and buttons to move to the next level. In our case, the hero - "good fellow" with powerful biceps and an inexhaustible supply of knives, spears, axes and other bladed weapons. At the end of each major level, he goes to battle with another super-monster occupying a third of the screen, and wins - if enough skill. Each super-evil monster has weaknesses and vulnerabilities, and to find them is not too difficult. 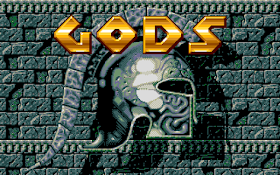 At this time, as it turns out from the screen, our "good fellow" wanted during his lifetime to become immortal and received from the task of the gods, which, according to the calculations of the gods, it was kind of like not afford (and that is not good when on Olympus appear extraneous). To become immortal, he must defeat the four great Guardians. However, the difficulties did not bother him, and he went to the feat.
Technical realization of the game (more specifically - we are talking about the schedule) is simply gorgeous, in general, is not very clear, both from the poor to the 282nd machines can be squeezed out fast and beautiful graphics of this class. But the "Gods" were for a long time, in late 1991! The case, when created in this period, the game is still one of the best in its genre, and it can recommend with a clear conscience, it is worth noting how unique.
The game consists of four large levels, and each level - three small ones, which for some reason are called worlds (worlds). Large level always ends the fight with a super-monster. With the worlds easier - you have to just find the key to the world, to find a way and the key to open it. Believe that things are so simple in appearance only. The further you progress in your exploits, the harder it becomes to play.
In the maze there are buttons, levers and other technical devices. Feel free to experiment, pull, push - the only way you can get to many secret prizes. Take all the keys that you come across on the road.
Sometimes you will meet the hawker, whose money can buy some useful things, such as weapons, health, defense, and more. Typically, you buy weapons is not: it and so provide a sufficient amount during the game.
Some worlds are extremely sophisticated in the sense that to pass something they can and so, but to go through, collect all that is possible - you have to beat the clock, to experiment and try a lot of options. Therefore, below we give only general recommendations on the most necessary for the passage of game worlds.
Starting the game, you can at any level, not necessarily from the beginning. To do this, at the beginning of the game select the menu item "ENTER PASSWORD" and enter the appropriate password.
If you start the game from the very beginning, you allocated a certain amount of money for the purchase of weapons.
Control of the game is very simple:
Arrows - movement hero.
Space - shooting, push buttons, toggle levers.
Esc - exit from the game.
Almost anything else you do not need, more remains to experiment: for example, to climb up the stairs and shoot from there, you need to simultaneously hold the Space key and the arrow direction in which you want to shoot.
Several cleverly implemented taking and leaving objects. Carry with them at the same time can be no more than three things. To pick up something from the ground, it is necessary to sit down (down arrow) and press the Space key, without getting up. The subject will appear among your possessions. Now the same Space should drive green kvadratik- cursor on the empty cells among your possessions, and only then release the down arrow and up.
In all the useful information for you at the bottom of the screen focus. On the left is a bank, and the level of liquid in it corresponds to the level of your health. When the bank finally empty, you unfortunately die.
To the right of health indicator depicts your existing items. Recall that you can carry up to 3 different objects. Further to the right - the number of points you score and the amount of money that you have typed in the form of treasure during his travels.

World 1.
Find the key to the world and reach the exit piece of cake, so we will not dwell on the elementary things. Before you rush into a fight with a monster first, do not forget to go to the right and take a throwing knife, weapon of the weak, but the other is still unavailable.
World 2.
To get out of this world, you will find a pot and take it to the warehouse, then you will get the key to the world. Be careful at this level there are two pots, one of them gives the key to the world, and second only adds points.
World 3.
Get out of the dungeon in the city and looking for the key to the world. No special puzzles you do not have to deal with here. Once the output is open, you have to fight with the first of the Sentinels. Although it's big, but stupid, and finish him off easy - especially if the city you can find a deadly weapon zipper. Lightning hits 25 times stronger than the knife! Unfortunately, after the fight with Sentinel, you lose the lightning.

World 1.
To obtain the key from the world, you have to bring three gems in a room where the key lies on a stand near the ceiling. Every stone brought key will be lowered a little while will not fall within your reach. For the most skilled there is another way, but it is more difficult - try to flip the lever in the room where the key ...
World 2.
The key to the world you will be given after you assign three cups in the room with the ship on the wall,
World 3.
Your primary task - to restore the destroyed mosaics on the wall. The first piece of the mosaic is right there, and to get the rest:
- Take the king's skull in a vase.
- Take a jar of herbs into the office.
- Get the ball from the Globe and restore the globe.
Two subjects - candle and cross - can assist in the passage of this level (in particular the cross), but to say that without them it is impossible to do, you can not.
At the end of the level you expect a duel with the second of the Guardians * dragon.

World 1.
Nothing is particularly difficult here is not found. The key to peace rests on the ceiling of the treasury, and you have to reset it from the ceiling, smashing bricks throwing maces.
World 2.
Bring to the output of three gems (the same as at the level of 2, 1 world), and the door will open.
World 3.
Locate the two vessels, and come with them to the right place, you will get the desired key.
With the third guard - giant boar - perhaps easier to handle than the dragon.

World 1.
The key to the world before your eyes will fall to the rotating spiked trap. To take it, trap it is necessary to explode a time bomb.
World 2.
To get the key to the world, bring in the alchemist's office three alchemical tool * cup mortar and lamp.
World 3.
Puzzles here, all you have to do - to find the key, and fight to the last of the great Guardians. Perhaps it is more difficult than all previous together.
‹
›
Home
View web version