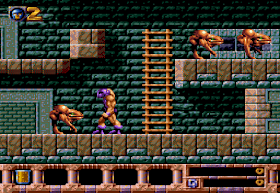 Genre: Action
Perspective: Side view
Visual: 2D scrolling
Gameplay: Platform, Puzzle elements
Interface: Direct control
Setting: Classical antiquity, Fantasy
Published by: Mindscape
Developed by: Bitmap Brothers
Released: 1992
Platforms: Super Nintendo (SNES), DOS, SEGA Genesis / Mega Drive
An addictive platformer game mixed with a shooter, and all this is transferred, somewhere closer to ancient Greece. In general, the game turned out exciting with riddles that need to be solved and in droves of monsters which need to be destroyed. Seasoned with an exciting plot. Four keepers captured the stronghold of the Gods. The gods announced that any hero who can defeat them will receive everything he wants. So our hero accepted the challenge, and at the end of the game he became a creature of the world, and rises to Mount Olympus.