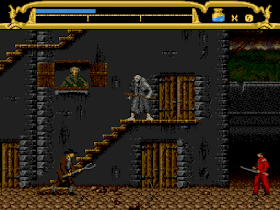 Genre: Action
Perspective: Side view
Visual: 2D scrolling
Gameplay: Arcade
Published by: Sony Imagesoft
Developed by: Bits Corporation
Released: 1994
Platforms: SEGA Genesis / Mega Drive, SEGA CD / Mega-CD
The game takes place at the beginning of the 19th century in the city of Ingolstadt, Bavaria. Dr. Victor Frankenstein creates a monster through his crazy experiments. Frankenstein rejects his creation because of its terrible appearance. The poor creature escapes from the doctor and vows to take revenge on him. The locals immediately take the monster for a demon and start hunting for it.

The game is an action-adventure platform game starring Frankenstein's monster. As a weapon, the monster uses a stick that can hit in three directions - up, straight and down. The stick can be set on fire and then the monster's attack becomes stronger. But over time, the flame goes out and you have to look for a new source of ignition. Another monster is able to perform a roll, as well as release an energy ball, the price of which is your health bar. Each level of the game is a big labyrinth. Sometimes, in order to reach the goal, you will need to look for chests with items. In addition to the chests in each level, you can find clue notes and items that replenish the player's health. In total there are 6 levels in the game, at the end of each there will be a battle with the boss.
‹
›
Home
View web version