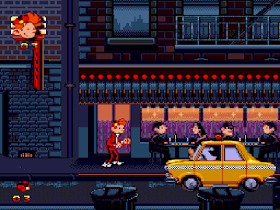 Genre: Action
Perspective: Side view
Visual: 2D scrolling
Gameplay: Platform
Published by: Infogrames Europe SA
Developed by: Infogrames Europe SA
Released: 1995
Platform: SEGA Genesis / Mega Drive
The adventures of a guy named Spirou from French comics. The graphics are not bad, the animation is just great, the sound is good. This Spirou is like a reporter, and he looks the part, and a squirrel is chasing after him. Our hero can climb stairs, crawl along wires, run and jump. During the game, we collect hats and pass obstacles. The game is a bit weird, but playable.
‹
›
Home
View web version