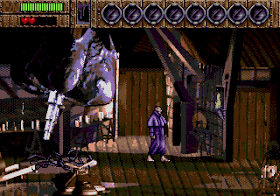 Genre: Action, Adventure, Compilation
Perspective: Side view
Gameplay: Fighting
Visual: 2D scrolling, Isometric
Narrative: Horror
Published by: Sony Imagesoft
Developed by: Psygnosis Limited
Released: 1994
Platforms: SEGA CD / Mega-CD, SEGA Genesis / Mega Drive
Game Mary Shelley's Frankenstein is a quest adventure with elements of fighting. At the same time, there were versions of the game for Sega Genesis and Super Nintendo, but in a completely different genre. The novel was based on the novel "Frankenstein; or, The Modern Prometheus" by the famous writer of the 19th century, Mary Shelley.

The game takes place at the end of the 18th century in Ingolstadt, Bavaria. Dr. Viktor Frankenstein creates a monster during his insane experiments. Due to the appalling appearance of the creation, Victor plans to get rid of it. The monster escapes, and afterwards he goes in search of his creator, that would get questions for his answers.

We have a quest adventure with a Frankenstein monster in the lead role. In this game, the creature gets more human qualities, and therefore can speak. As in other games of this genre, you have to find different objects and use them in the right places to achieve your goals. In the course of the game will have to fight with opponents, and then the game begins to resemble another game genre - fighting game. Health can be replenished by finding food or helping people who in gratitude will reward you with provisions. The goal of the game is to help the monster find his place under the sun, sharing his destiny in this cruel world.
‹
›
Home
View web version