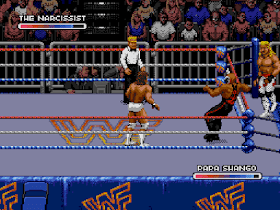 Genre: Sports
Perspective: Diagonal-down
Sport: Wrestling
Published by: Acclaim Entertainment, Flying Edge
Developed by: Sculptured Software
Released: 1993
Platforms: SEGA Genesis / Mega Drive, Super Nintendo (SNES)
WWF Royal Rumble is the second game in a trilogy of 16-bit platform wrestling games from LJN. In addition to the already familiar One-on-One, Tag Team matches, two more have appeared: Triple Tag Team and a completely new one - Royal Rumble.
Visually, although the game resembles Super WrestleMania, the differences can be seen with the naked eye. All fighters are carefully redrawn and look more impressive and clearer, down to the press cubes. True, Yokozuna, weighing 2 times more than other fighters, is too slim in this game. The animation has also become a cut above, and the number of movements is pleasantly pleasing. Some of the new moves are Body Splash, Knee Drop, Backbreaker and Atomic Drop. Each fighter now has personal finishing moves. The backgrounds, on the contrary, were made less noticeable, although they received full interactivity (a stone in the garden is the Mega Drive version) and look real, unlike the pseudo-painted wallpapers in the previous game. The ring has become a little larger, now it is possible to be below or above it, and not just to the left or right. The living standards bars have been revised. Also, if the fighters grappled, an indicator appears showing which side has the superiority of forces.
Let's talk about the fight itself. If the opponent is very obstinate, you can go outside the ring, find a steel chair and beat it properly. A gaping referee after several innings is sent to the floor, and at this time you can arrange real fights without rules, souling the enemy, or squeezing his eyes out.
The menu has been completely redesigned. Here we have a dynamic splash screen, and a bunch of new options. When choosing players, we see a large photo of only one, but next to it we see a short resume. In the Mega Drive version, when navigating, player profiles shift to the left or right, while in the SNES game they change dynamically - a transparency effect is applied (wow, transparency in 1993 !!!). And before the start of the battle, we see a newspaper with the announcement of the battle. What did you want? The game is 1.5 times larger than its predecessor, the increase is felt!
This wrestling is still far from the dynamics of WWF RAW, but progress is already evident - the game is a modern wrestling simulator, with all the necessary attributes. The SNES version, in my opinion, is still better in both graphics and sound. The fonts in particular stand out. One gets the feeling that the developers of the SEGA Genesis version were just too lazy to come up with the original font, or at least transfer it from the SNES game. However, the graphics have been optimized better, at least the photos are not as ugly as they used to be.
Separately, I would like to talk about a new furious match that gives a lot of pleasure - Royal Ramble. The Royal Battle begins as usual with two fighters, but in the process of the duel, after certain intervals, others join it - up to 6 athletes are allowed to be in the ring at the same time. As some go out, new ones come in. It is not necessary to hold the opponent, the main thing here is to throw him out of the ring. In this case, the victim must fly over the upper ropes and touch the floor with their feet. The last one remaining in the ring out of 12 is the winner. At the end of the Royal Rumble, points are calculated, the total time spent by the fighter in the ring and a list of defeated opponents are displayed.
And a little about match options:
In the single player mode, or in the Royal battles for one or two, you can choose the difficulty of the game from 1 to 10.
SEGA Genesis: There are 12 fighters to choose from: Randy Savage, Bret Hart, Hulk Hogan, The Undertaker, Crush, Jim Duggan, The Narcissist, Shawn Michaels, The Model, Papa Shango, Razor Ramon and IRS.
SNES: Another roster of 12 fighters to choose from: Randy Savage, Mr. Perfect, The Undertaker, Bret Hart, Tatanka, Crush, Ric Flair, Shawn Michaels, Razor Ramon, Yokozuna, The Narcissist, Ted Dibiase. No wonder there is no Hulk Hogan. I think that after the steroid scandal, "Immortal" was removed from the game out of harm's way. Could it be Nintendo's famous censorship? In any case, the composition of the fighters, as in the prequel, is different.
Data East released a pinball game of the same name in 1994.
A heavily expanded version of the game was released for the Sega Mega-CD as WWF Rage in the Cage.
‹
›
Home
View web version